Well, we've made it to Granada and we're on the hunt for an apartment to live in for the next 3 1/2 months. I finally found wi-fi and then my computer was acting up so now my battery is almost spent. I wanted to quickly post an update though. We had a little rough patch in Barcelona. Kevin's packpack was stolen, but thank goodness we didn't lose anything vital (passports, camera and computer are all safe and sound). We are happy to finally be here and the town seems very clean and nice. Not many English speakers here so I've really had to jump into survival mode, making phone calls in Spanish to inquire about apartments. We just saw our first one and it seemed nice so we are relieved that we won't be homeless on Monday. We have one more to see tomorrow. It is hot here, upper 90's and we've resorted to taking siestas in the afternoon, just like everyone else here. OK, I hope to be set up with internet soon, so I can return to the blog. Hasta Luego.

Burned Out in Barcelona 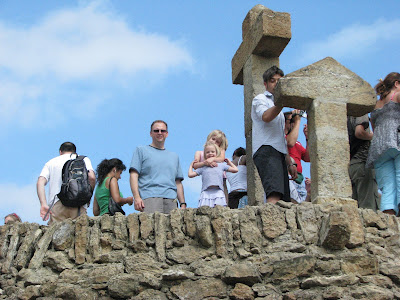 Today I was held ransom by the kids, they basically refused to leave the apartment. It seemed like yesterday they were so bad we didn’t even feel that they deserved to be bribed. I think they are sleep deprived and totally burned out on all things vacation, especially sight-seeing and walking more than two blocks. I stayed in and let Kevin go to the modern art museum. They were very happy to stay in a play with the various toys and souvineers they have collected. Too bad I didn't have internet connection. The pic is from yesterday, we climbed to the top of a very high park. (Actually we had the help of 6 escalators). Let's hope a good night's sleep will revive the girls.
1 comment:

Email ThisBlogThis!Share to TwitterShare to FacebookShare to Pinterest
Labels: Barcelona, Spain, the trip 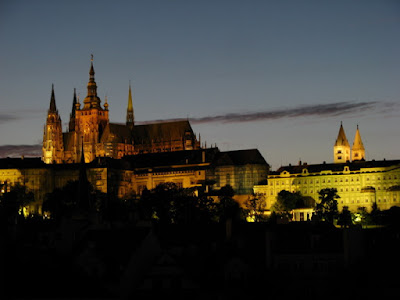 Email ThisBlogThis!Share to TwitterShare to FacebookShare to Pinterest
Labels: Prague, the trip 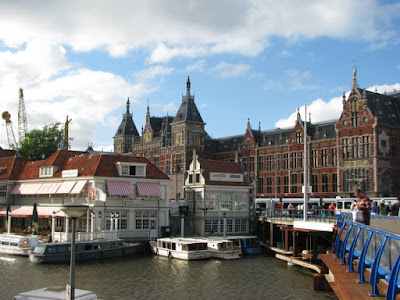 Email ThisBlogThis!Share to TwitterShare to FacebookShare to Pinterest
Labels: Amsterdam, the trip 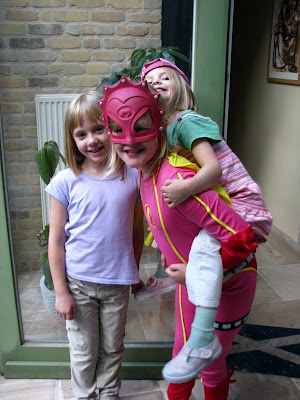 August 4
The girls finally found a playmate and we had to wait for an hour after everyone was ready to venture out because they could not tear themselves away from Mega Mindy. Has anyone heard of her? I guess she is very popular here. I know the smurfs are Belgian, but maybe Mindy hasn't had enough time to make it to the US. This is actually the 9 year old daughter of the B&B owner, but I can't remember her real name. To me she'll always be Mega Mindy.

Bruges is a very small town with cobblestone streets and unique architecture, lot’s of bicycles, some tourists in horse drawn carriages and boats in the canals. Some call it the Venice of the North. The girls are begging to go in a boat, but we are saving that adventure for the next town. We we’re talking about it today and Sydney said, “Yes, we’re going to Hamsterdam!” Today we just wandered around town on foot and let the girls play at the park for a couple of hours. If you need and lace or chocolate, just let me know. (except by the time you read this, we will have moved on) I miss my cable modem. I also miss wash cloths and Kevin misses sheets. In all eight or nine places we’ve stayed there has been no trace of wash cloths or top sheets. Europe seems to be all about comforters with duvet covers and our relationship with them literally runs hot and cold. Now that we’re having summer weather, it’s sometimes too hot for a comforter, but too cold with nothing. Kevin’s clever solution is to take the comforter out of the cover and just use that. Then, if I get cold I just throw the comforter on top of the cover. In Scotland I heard it pronounced doo-vee. Don’t we say duvet, like doo-vay?
Click here for pics of Bruges.
1 comment:

Email ThisBlogThis!Share to TwitterShare to FacebookShare to Pinterest
Labels: Belgium, the trip 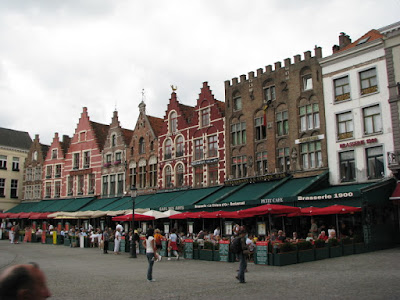 To today we took the Eurostar train from London to Bruges, Belgium. They tell me I went through a tunnel under the English Channel called the Chunnel, but I never saw any water, so who knows. Wouldn’t it be so much cooler if the tunnel went through the water and the tunnel was clear? Maybe you wouldn’t see anything, but if you did, that would be something. Back in London there was a small glitch printing our prepurchased train tickets from the automated ticket machine. So I went to the counter and waited for new tickets to be printed just minutes before we were to go through security. When I noticed they were stamped with the wrong date, the lady at the window proceeded to correct it with a pencil. Nice. We had to change trains in Brussels, and on the second train I showed the ticket guy my ticket, hoping everything would be OK. He stared at it for a minute and then said, "F*** it" and handed it back to me. Whew. I'll have to say thats the first time I've really been happy to hear the F word. We made it to Bruges and stayed at our first Bed & Breakfast. It only had three rooms and we had two of them, so made ourselves at home.
No comments:

Email ThisBlogThis!Share to TwitterShare to FacebookShare to Pinterest
Labels: Belgium, the trip 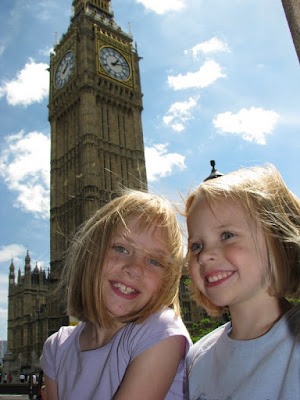 We stayed in a great one bedroom apartment in the suburbs of SE London last week, but the internet connection was very poor. So here is London in one long post.

Monday, July 28
Our first full day in London, we headed into the city for a little sight seeing. We went to the Tate Modern Art Museum. Afterward, we walked along the Thames River and across the Millennium Bridge for pedestrians. The locals call it the wobbly bridge. Well, we’re wondering if the maximum time a 4 year old can tolerate an extended vacation is four weeks. Today Sydney’s mantra was, “I want to go to Oregon”

Tuesday, July 29
Sydney threw up last night. This makes me hope that she will last a bit longer on the extended vacation. I think she was just homesick because she was feeling under the weather yesterday, and we didn’t know it. So, Kevin went to Bletchley Park, the home of Britain’s code breaking efforts during WWII. He got to see lots of stuff about Alan Turing and the deciphering of Germany’s Enigma code along with a working reproduction of the world’s first computer – the Colossus.

I stayed home to do several loads of bed linens and clothes in a tiny washer and no dryer. Luckily the sun came out to dry the sheets before night time. After Kevin returned, I took my turn to walk a few blocks to the movie theater to see The Dark Knight. Did you know they have reserved seating at the movie theaters in London?

Wednesday, July 30
I’m always up to see a new cathedral, usually impressive inside and out and short enough that the girls don’t get too bored. Today we went to Westminster Abbey which is huge and full of history and burial sites of all sorts of historical and famous people. Who knew? Not me, I’m not so good with the history stuff. So not only do you have all of the kings and queens of England, there is also a poet’s corner and a section for scientists. Here are a few names you may recognize: Queen Elizabeth, Mary Queen of Scots, Shakespeare, Lawrence Olivier, Chaucer, Darwin, and Newton. So we spent quite a lot of time at the Abbey, which made us feel better about the high entrance fees. Next we walked around St. James Park and saw Buckingham Palace, and continued on to Trafalger Square, the girls had a great time trying to climb up the huge Lion statues. Sydney however, was devastated (read, threw a fit) that I would not let go of her feet in order for her to climb all the way onto the Lion’s back. Oh, by the way, Sydney seems to be good as new - healthwise.
It always takes longer than you think to get home on the trains, especially when you have to get off the stop after you just got on because Kyla had to go to the bathroom. The train stations seem to have no bathrooms and no trash bins here. We ended up having to carry the girls home since they fell asleep on the train. Thankfully our apartment was only about 2 blocks from the station.

Thursday, July 31
No one felt like doing much today. Kevin cooked lunch, went to the grocery store and took his turn at the movies. I took the girls to the local park and pool. The shallow pool was being repaired and the big one was cold, but we stayed in for over an hour. Sydney’s suit is barely hanging in there and we didn’t pack her floatie, but she still loves to go swimming. Going to the park made us all a bit homesick, missing our friends and playmates. Kyla and Sydney decided that they both miss school.
Friday, August 01, 2008
We have been abroad for one month today, wow! That means we're about half way through the vacation part of our trip. It was nice to have a little down time in London this week, but now we're feeling the pressure to get some sights in before we leave on Sunday. Today we went to the British Museum. So much to see, so little time. This place was awesome – you could spend days there. The girls were thoroughly bored. They were somewhat impressed by seeing their first real mummy. We also saw a naturally preserved body from about 3000 BC. Sydney seems to be getting carried more and more. I saw a heading labeled “Buggies” on the museum brochure. Unfortunately it was advertising parking, not rental. Please send a stroller! I guess it would have been a real pain when going up and down and the stairs and escalators on the underground trains though.

Saturday, August 2
Today was our last full day in London. We went to Greenwich, home of the Royal Maritime Museum which has a great “all hands” area for kids and the Royal Observatory (prime meridian). Of course we have pics of us standing one foot in each hemisphere. Actually now they use GPS technology from the center of the earth to figure out exactly where the zero point is and the famous red line of the prime meridian is 332 feet off the mark. (shhh, don’t tell the kids). This video is of Sydney at the park in Greenwich - she cracks me up. Kevin too, you can hear him laughing in the video.